Only if you are Dr. Doolittle or your dog is Lassie could this be the way a dognapped dog saves himself from the evil dog thieves! Well, that is what we might think but this is one very special dog and the pet store employee is a dog whisperer in his own right.

Let me introduce you to Vango , a beautiful and energetic Australian Shepherd. Vango is absolutely adorable as well as smart and was only 5 months old when this amazing event occurred! How Vango alerted the pet store employees that something was very wrong proves jut how smart he really is.

Dognapped Dog Saves Himself By Alerting Pet Store Employee That Something Was Wrong!

This very unusual self-rescue took place in a pet store in Gatineau, Quebec, Canada. An employee, Yves Jodoin, is not only a staff member but is also a dog trainer as well.  Because of his specialized training and experience with dogs, he knows a lot about dog behavior.

When Vango pranced into the pet store he was accompanied by a man and woman who claimed to be his owners in need of dog supplies. It was difficult for Jodoin to pay attention to the humans because the dog wouldn’t stop barking in an attempt to get his attention.

Although, at first, he thought that this yappy pup was hungry and asking for a dog treat. So, he gave him a cookie. The dog treat did not satisfy the dog who kept on barking and bouncing around. It soon became clear that there was more going on than met the eye.

His curiosity grew even more intense when the “owners” could not answer to his basic questions about the dog. They had no food and no idea what brand of food they fed him. Neither one of them recalled where they had bought the puppy or when. Hmmm.

Further, they did not know how old he was, if he was up-to-date on his “puppy shots” or if had been neutered. They  did not know how much they had paid for the little fellow or even if he had a favorite toy! Very strange, indeed.

According to Yves, “They were evading the questions.”  Fortunately, Lydia Blouin, another pet store employee also felt that something was “just not right”. Being quite computer savvy, she was able to quickly check social media regarding missing dogs.

Lydia quickly located a photo of Vango online and he had been reported as missing. Vango had most recently been seen in Buckingham where he happily lived with his family. The pup had only been missing for two hours when he pranced into their shop! Yves described the hectic scene. “At that point I said, ‘Vango, come!’ And the dog was reacting, he was jumping.” He went on to say, “All along he was barking and poking, trying to say, ‘Hello, I’m not the dog they say I am.’”

It was at this point that the dognappers admitted that they had just acquired the pup. According to the tale they told, Vanco had been running wild in the woods when they found him. The woman was reportedly in poor health and needed a support dog.

Because they did not have the money to purchase a dog and this poor pup needed a home, they decided to keep him! When it became quite obvious that no one was buying their lies, they agreed to leave peacefully without the stolen dog.

It was then that Vango’s real owner, Josée Francoeur was contacted.

As you can imagine, the real owner could not believe what she was being told when the pet store employee called her with the good news. She was practically in shock! She had always maintained that Vango would never have left their yard on his own accord.

He was there one moment and then gone the next. The yard was fenced and the gate was closed. How could this have possibly happened?  “Is it possible that someone took him? And I was thinking, ‘Who could do that? It’s impossible!”

She was still reeling with his loss and questions about how such a thing could have happened when she received the unexpected call. You can imagine how relieved she was to know he was ok and so close to home.

“I can’t talk about it without crying,” she said. “Imagine, If those people didn’t go to that pet store, I would have lost my dog forever.”

Determined to never have to go through this kind of ordeal again, Josée quickly made a decision.

Although she had not chosen to microchip Vango in the past, she immediately made an appointment for it to be done as soon as possible. This was not an experience she would ever want to repeat. Vango was safely home again and she wants to keep him there! What happened to the dastardly dognappers after the dog saves himself and is returned to his owner?

Actually, they got too easy to my way of thinking. So thankful to have Vango back in her arms, she took the higher road. All st.he did was to file a formal complaint with the local police department.

“I don’t want to cause them problems. We don’t know why they did it. But at the same time, they took my baby,” the owner. “I want to discourage others from doing this.”

Thanks to Vango’s clever behavior, he is now in the hands of his loving owner again. What a smart pooch!

If  you interested in reading about dogs being stolen becoming almost epidemic, go here: https://happymutt.org/what-on-earth-is-dog-flipping/

Do you want to know more about microchipping your dog? Go here: How Do Pet Microchips Work and Should My Dog Have One? – American Kennel Club (akc.org) 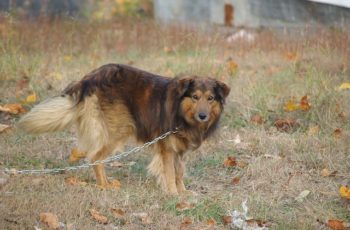 Should neighbors help enforce tether laws? My Daddy would be … 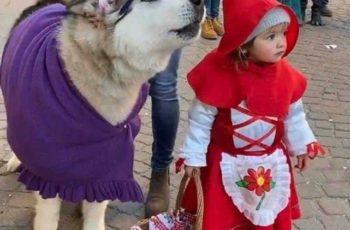 Little Red Riding Hood And The Big Bad Wolf Are …