Home
Happy Mutt
Lucy Has Been Reunited With Her Family
Thankfully, the Bratspis family is complete once more. Lucy was reunited with her family after being apart for five weeks. On July 31 there was a two automobile accident in Canton, Ohio. Lucy, their Schnauzer-Terrier mix fur baby ran away from the accident site in fear.
A local dog rescue group located Lucy after several weeks of an intense search. Several local organizations joined forces to help find the terrified dog after a woman and her daughter reported her location.
The rescue team promtly took Lucy for a full veterinarian examination. Thankfully, Lucy was not injured. However, she had lost greater than 20% of her normal body weight and was noticably thinner. Nevertheless, the family appreciated the photos sent by the local rescue team.

Lucy is an emotional support animal. Unfortunately,  airline regulations regarding support animals in the cabin changed during the family’s summer visit to another state.

The entire Bratspis family lives in Scottsdale, Arizona but they were enjoying the summer in New Jersey. The changes in airline regulations made it challenging to return home with Lucy onboard.

How it all began

They had booked a flight to Chicago for the entire family. Lucy was to fly in the plane’s cargo area. They planned a stop off in Canton so the family could go to the Pro Football Hall of Fame. They were on their way from the airport to the hotel in Canton in an SUV headed west on State Route 62. Suddenly, a pickup truck pulled in front of the SUV and the a collision was inevitable.

In terror, Lucy sprang from the SUV and bounded from the site of the crash. She ran off in the direction of the Case Farms Poultry Processing Plant. A frantic search for Lucy began and The Canton Repository ran a front page story on the accident, encouraging everyone to help look for Lucy. 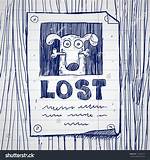 Randi and the two Bratspis children flew home to Arizona but Brian remained in Canton to help search for Lucy. Later on, Randi joined Brian in the search for Lucy for an additional three days.

Finally there was great news to report!

“Thank you to all the people of Stark County, Alliance, Louisville, Canton and the surrounding areas,” Randi shared on Facebook. “We are elated to announce our Lucy was found alive and well tonight within 1/2 mile from our crash site.”

The countless flyers, which advertised a $500 reward for the missing dog, and Facebook posts paid off.  A few people reported seeing her in a quiet wooded area.

“She was coming out, apparently, in the middle of the night,” Brian Bratspis said. “Dog spottings were between like midnight and three-o-clock in the morning.”

Shortly after 1 a.m. Friday, Amanda Ammond was on her way to feed a Taco Bell craving when a dog matching Lucy’s description bolted in front of her vehicle. Ammond, who lives about a quarter-mile from where the crash happened, said she wasn’t sure it was Lucy.
The dog was larger than expected, but she recognized the scruffy tail from photos posted online. Ammond posted the sighting on Facebook . She then invited her daughter to assist her in her search for Lucy.

Page Two of How Lucy Was Reunited With Her Family

Amanda and her daughter drove north of Columbus Road NW to a wooded area. There they observed deer running away from something and heard barking. Suspecting it might be Lucy, sbe and a local “dog whisperer”, Ramona Hartleben set up food traps and a camera. This was Lucy’s lucky night!

Brian Bratspis was “immensely grateful for everyone who helped his family.” “Canton’s going to have a special place in our hearts and our lives forever,” he said. “They made us whole again.”  Their son, 14-year-old Zander, was “ecstatic but  their daughter, 12-year-old Rylan was not home to receive the great news.

She was at a Friday night sleep- over with a friend. Rylan has always had a very special relationship with Lucy. “We’re waiting to pick her up this morning, and we’re going to give her the big news,”said her dad.. “She’s going to be elated.”

Brian offered the rescuers a money reward which they declined to accept. However he plans to donate to the organizations involved in the engthy search. Amanda Ammons earned the promised reward because her sighting led to the rescue of his precious Lucy!

Randi Bratspis flew to Cleveland prior to driving  to Canton to finally see her beloved Lucy. It had been a lengthy ordeal and there was still another chapter to go in this point of their saga. They were not willing to put Lucy through the trauma of flying in a cargo hold after all she had gone through over the past weeks.

Brian approached several airlines. He sought approval for Lucy, a trained support dog, to fly in the cabin.  Lucy had flown many times without any problems in the past. As you can imagine, the 32 hours it would take to drive to Arizona would not their first choice! Nevertheless, whatever it took to get Lucy back home would be worth it to her and to her family!

Thanks to the kindness of strangers….

They were not able to get a flight with a commercial airliner. Fortunately, due to the kindness of strangers, they were able to get Lucy back home.

Thanks to Karin and Ed Robson, Lucy was reunited with her family in style. 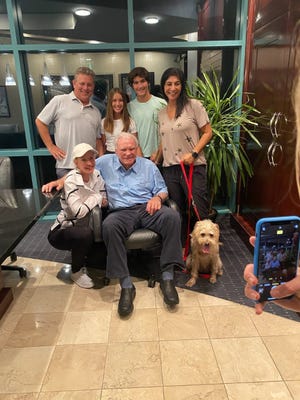 Lucy boards a private jet to be returned home

Lucy is reunited with her family via a private jet.

This article is worth reading.

This article shares tips on how to find a missing dog.

Thanks To Sausages, Missing Dogs Find Their Way Home 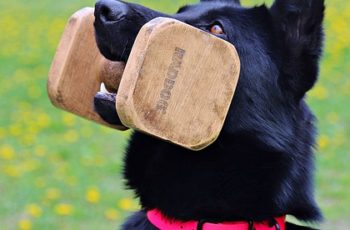 Why do dogs play? Do they play for the same …