Walt is a dog that was born on the streets and spent his entire life there. He grew up fearing humans and avoiding them altogether. When he was rescued, he didn’t know what to do with himself. All he knew is that he couldn’t trust people. This scared, adopted stray dog was timid and frightened of everything.

Kelly and her family had always thought about adopting another dog. They had searched for almost 18 months but it seemed like they couldn’t find the perfect one for them. They went to numerous shelters and visited countless websites. But still, they didn’t find the dog that felt right for their family.

Then one day, Kelly met Walt. Although the dog seemed distant and she was told by the staff that the former stray was frightened of people, she felt taht there was something special about him. Although he wasn’t aggressive, he tried to keep his distance whenever anyone tried to come near him. Nevertheless, Kelly felt that it was her duty to give this dog a better life.

They filed for adoption and soon after, she was taking Walt home.

Hesitant and scared, Walt was taken home to a new environment

When they arrived at their house, Walt was very reluctant to go in. This scared, adopted stray dog had never lived in a home and he didn’t know how to react. Even when he was inside, he would hesitate to move around. He was just too scared of the unfamiliar situation and environment.

Walt spent hours by himself, just staring at the walls. Even when Kelly or her family members would pet him to give him comfort, he would cower and shake. But eventually, he started coming out of his shell and started trusting his new family. Thanks to the help of their other dog.

The two pups started buildng a bond and soon Walt began to copy what his new sister was doing. The former stray was also enjoying the love and affection that Kelly was showing him. In a few short months, Walt was a new dog. happier and more sociable.

Here is another heart-warming story about another very frightened homeless dog who had a major complication.  https://happymutt.org/woman-rescued-a-confused-scared-and-starved-pregnant-dog/ 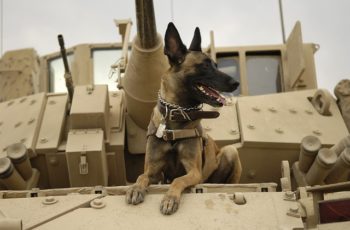 =they K-9 heroes, past and present, are always interesting. Have … 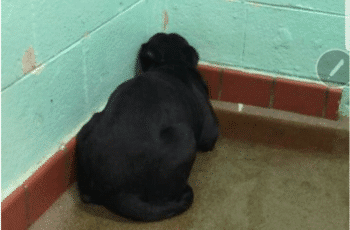 How Could You Abandon A Family Member? Could you abandon …