The term “Party Animals” took on a new meaning when eight young men began their celebratory Bachelor Party in a cabin in the woods of Tennessee. It had never crossed their collective minds that instead of partying down they would be rescuing a new mom and her litter of pups.

Their thoughts had been focused on having a good time and sharing the last few days of bachelorhood with their buddy, the groom-to-be. However, on the first night of the celebration event, a malnourished female dog showed up at the cabin. Quickly, their party mode shifted into rescue mode.

While in the midst of cooking dinner, they were interrupted by a dehydrated, seriously malnourished yet very friendly dog. The tempting aroma of the bacon they were frying is likely what had enticed her to their cabin.

One of them noticed that she appeared to have recently whelped a litter of puppies. They also noticed that her milk seemed to have dried up. Eager to help the new mom in any way that they could, they first hydrated her and then fed her as well.

Step One Accomplished, Mama Dog Had Been Fed

Once this was accomplished, they noted that her milk had started to come back in. This indicated to them that she was, indeed, a very new mom and her pups were in need of her milk if they were to survive.

After drinking and eating her fill, the Mama Dog was eager to get back to her babies. As she deliberately left the cabin to return to her pups, the men followed closely behind.

They knew she would be hesitant to take strangers directly to her litter of puppies.  Yet, they hoped their kindness in feeding her would encourage her to trust them enough to help her babies as well.

Step 2 Was To Locate the Newborn Pups

As she neared the area where she had hidden her babies, she became somewhat protective over one specific spot. After a careful inspection of the general area, they located the den in which she had carefully hidden her seven puppy litter.

The men hoped they had earned enough goodwill with the Mama Dog for to allow them to get near the puppies to make sure they were all o.k. They slowly and quietly approached the den, doing their best not to spook their mama.

Thankfully, their kindness (and Bacon) had made enough of a positive impression on the Mama Dog for her to allow them to handle her babies. Of course, she made sure to stay close by,” just in case,” as any good mama would do.

As explained to the ABC News by one of the rescuers,  “We set each pup individually down in front of her and she nuzzled their faces and she checked out the pups and to the person holding them, she gave the look of, ‘It’s OK, I trust you.’ Every single one had a big fat belly on them. The mom had given the pups literally everything she had.”

On A More Personal Level, The Pups Needed Names

By now, the rescuers had decided that Mama Dog needed a more appropriate name and decided on “Annie.”  Of course, they had to name all of Annie’s puppies as well: Bear, Brimmy, Daisy, Finn, Gunner, Knox and Rose. I would love to know how they came up with those names, wouldn’t you?

After naming the entire furry family comprised of Annie and her seven pups, they decided that they seriously needed cleaning up. So, back to the cabin they went with the flea-ridden and filthy pups in tow with plans for a family bath.

The Pups Also Needed Cleaning Up

Apparent spokesman for the group of delayed partiers, Craddock, said to  a reporter for the to Michigan News “Well, we’re washing our puppies because they had all come out of a hole and they were all dirty, so there was a group of rough men going down to go four-wheeling, but instead they are inside washing puppies.”

The men were diligent in their puppy care. By day three, the men had decided to spend their beer money on something much more important. Dog food was more important at that time.

They also realized that they only had a few more days to enjoy playing nursery maids to the pups in the cabin. The men needed to come up with a plan for the puppies’ future. They knew they could not just walk away, leaving them to fend for themselves.

The problem was resolved fairly quickly. It did not take long for them to see that the answer was obvious. There were 8 men and 8 dogs. How simple could the solution have been? Each dog was adopted by one of the men who had rescued them.

This perfect solution meant that Annie and each of her puppies would be living very close to one another. They would literally be living within 5 miles of one another!

Can you imagine a better outcome for the puppies and their mother or for the men who rescued them? I can’t. 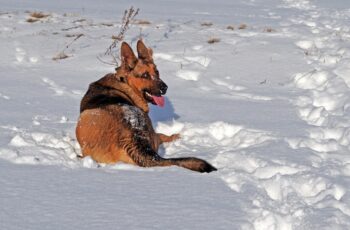 A video on the Internet showed a brave German Shepherd … 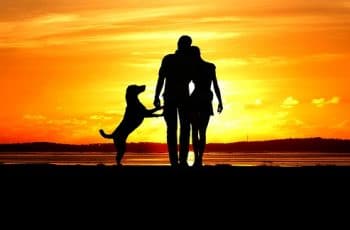 Finally, we are seeing some lucky dogs separated from their …