Abbey is a 14 year-old mixed breed dog (Poodle-Hound)  who was missing for two months. She survived all that time in a cold, dark and dank cave not too far from her rural home in Missouri. How this lost dog was found after all this time is truly amazing!

After two months of being lost her owner, Jeff Bohnert, had almost given up all hope of ever seeing his beloved Abby again. He was doubtful but still hoping that it would be her that a neighbor reported finding in a cave not too far from his home.

Local spelunkers (cave explorers) were investigating the nearby cave when they were surprised to find their neighbor’s elderly dog inside the cave. They took a photo to share with their neighbor to let him decide if this dog really was his Abby.

He was skeptical that such an elderly dog could have survived such conditions for so long but he was still hopeful that it really might be her after all. Jeff had to go see for himself if it was or was not Abby.

Amazingly, the elderly lost dog found in a cave was Abby! 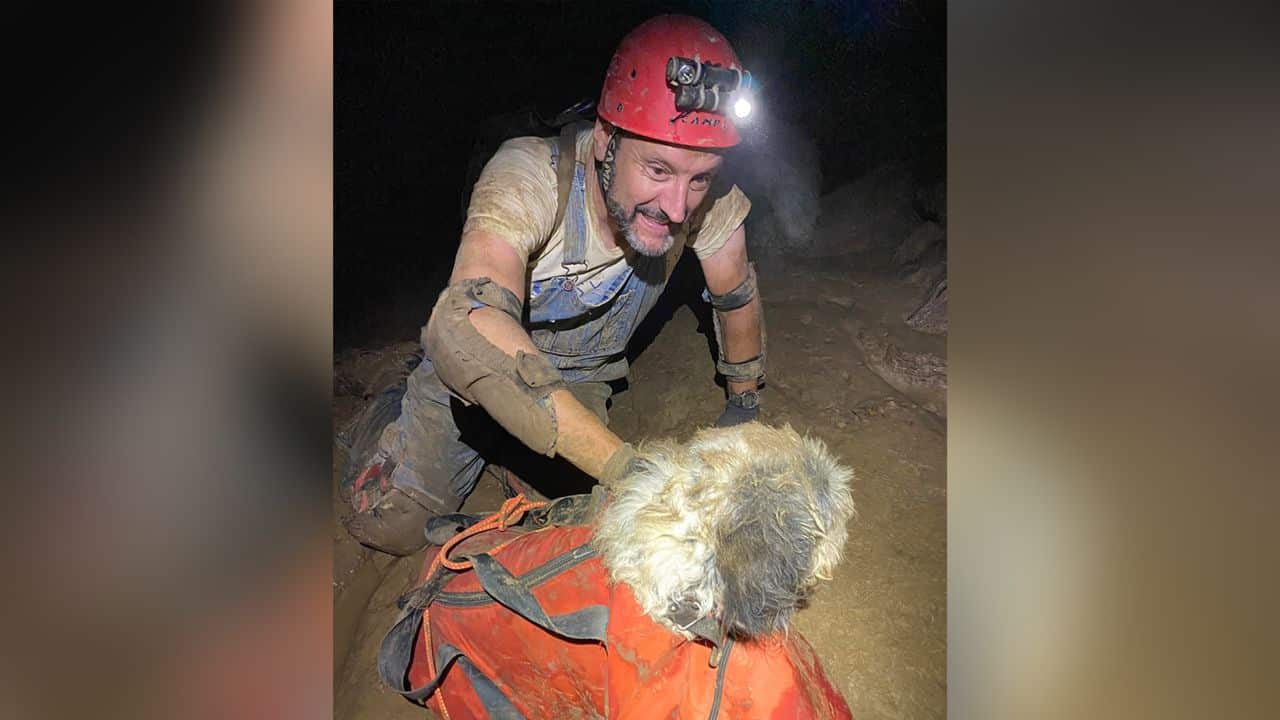 No one would have ever imagined that such an elderly dog could have survived for so long in a dark, dank and cold cave without anyone to feed her. Abby and her canine family member, Summer, did everything together including getting into mischief on occasion.

They often frolicked through the nearby fields, chasing small creatures until they lost interest before heading home. We will never know which one was the ring-leader on June 9th, the day they disappeared.  Summer returned home the next day but Abby did not.

“They never separate,” Jeff said. “I figured something bad had happened. I mean, she’s old. She could just get overcome by the heat.” Bohnert posted about his missing dog on Facebook, reached out to neighbors and contacted police, but no one had seen Abby.

It was nearly two months later when Gerry Keene, joined by 5 adults and 5 children entered the cave. Berome Moore Cave was commonly explored by local cave explorers. As usual, one child ran ahead of the others in his excitement and quickly called out to his dad, ”
There’s a dog in here.”

Keene said ,“Their dad was like, no there’s not.” But, he was in error.  “She was just lying there curled up in a ball,” Keene further stated. He also said “She lifted her head and looked at us but she didn’t respond to verbal commands. She looked like she was pretty close to being done.”

Keene was assisted by one of the other adult spelunkers, Rick Haley. They knew that Abbey would need help to get our of the cave safely. The 500 foot passageway leading back out was steep and narrow. It would take some effort to get Abby out of this cave.

About the Cave and the Spelunkers

This cave is part of one of the longest underground chains in the entire country. Many spelunkers  have helped to explore and document this chain and some of them lived in the area.

Thankfully, Haley had trained to rescue people from caves and had suitable equipment in his truck. He tucked the elderly, cold dog into a duffel bag with a warm blanket to comfort and protect her. After weeks of being in the cold, damp cave with little nourishment she was both weak and fragile.

Haley shared that, “It was critical that we not give her any rough handling,” He further stated, “We would carry her short distance, set her down, then kind of move in front of her, reach back, pick her up, and put her in front of us”, describing a leap-frog kind of movement.

The rescuers bean by going door to door asking if anyone had lost a dog. It would actually as one of those neighbors who recalled that Jeff Bohnert had lost a dog nearly two months ago. Since he could literally see the cave from his house, they wondered if the rescued dog  might his Abby.

Although no one would ever have thought such an elderly dog could have survived such conditions for that long a time, it really was Abby. Soon after finding Abby, Keene briefly went to a few homes nearby to see if anyone was missing a dog.

One of those neighbors subsequently reached out to Bohnert, who lives close enough to the cave site that he can see it from his home. Jeff was convinced that a dog that old could never have survived such an ordeal. However, he had to know for sure if it was her or not.

A Few More Details Of The Rescue

Getting Abby our of the cave took about 90 minutes Immediately upon being carried out of the cave, Abby was given a small bit of beef which she readily gobbled up.  Keene reported that “She almost ate his finger off.”

Jeff speculated that Abby must have fallen into the cave via a sinkhole or wandered into a hidden entrance. They found evidence of her trying to get out with paw prints everywhere.

She was just skin and bones and covered in mud. There had been episodes of flooding while she was in the cave. Luckily, she had no obvious injuries. Abby was very weak and lethargic.

After had also lost her voice. The poor dog had likely barked for a  long time in hope of being rescued. It did not take long to gain back the weight she had lost and has finally begin to regain her voice as well.

Now that she is once again wagging her tail Jeff thinks she has been able to put the traumatic event behind her. He happily tells everylone that  “It’s amazing how she’s springing back already,” and that “she’s acting like herself again.”

Here is another story of a canine rescue after many days. https://happymutt.org/two-dogs-rescued-after-trapped-in-an-abandoned-missile-silo-for-22-days/

And, another story of an unusual way to find your lost dog: https://happymutt.org/minnesota-woman-recognized-her-long-lost-dog-on-a-beer-can/ 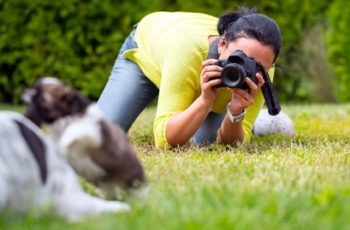 If you answer “Yes” to any of these questions, you …

Why do dogs play? Do they play for the same …