Not all brothers are blood-related. Some are not even the same species! When this is the case, it usually takes some time for the bonds of brotherhood to develop. Occasionally, however, it happens at an amazing pace.

Let me introduce you to Toby, Pablo, and their dad. Pablo is a bulldog and had been a member of the family for quite some time when the newborn baby, Toby, was born. Just imagine how exciting it would be to introduce two of the people you love the most in the world to one another. Even better would be watching them form the strong bond of brotherhood over the months to come.

On Day One, when dad introduced Toby to Pablo, the bulldog very gently peeked over toward the newborn. Dad captured this introduction on video as well as many of their other interactions over the months to come.  The loving father cautioned Pablo at the first meeting,  “You got to be gentle. I know you’re excited, but you’ve got to be gentle, all right?”

Becoming Brothers Was Captured On Video

video of bulldog and tiny brother

@bulldogpabsWatching Pablo with Baby Toby. From day 1 to 6 months later The Look of Love Between Brothers

Pablo was just too cute for words! The viewers of the videos over the first six months of Tony’s life were completely won over. Pablo was such a protective big brother but he was also extremely gentle with the baby as well. The general consensus was that from the beginning, Pablo had taken over the responsibility of watching out for Toby.

By the end of six months, Pablo’s bond with Toby had truly won people over. Pablo now not only kept watch over Toby like a protective big brother, but he also knew how to kiss him! Pablo was amazingly gentle and this was frequently commented upon by the viewers. Here are a few great photos of the brothers together.

Here are two more stories about brothers of different species for your reading pleasure.

A French Bulldog And His Pig Brother Were Inseparable Siblings 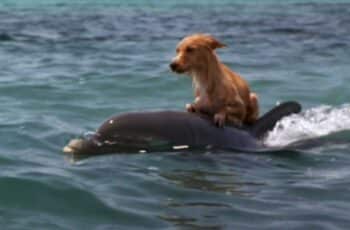 Did you hear about the dog saved by a dolphin? …

Have you ever heard the phrase “Sick as a dog”?  …